A downloadable game for Windows and Linux

Another World is a 2D Adventure about a developer who gets stuck in his own game.

The game maintains a story with adventures and quests, different weapons to use, hidden items to be found & different and proactive monsters to fight.
With top down visuals, and cartoon art style- the game offers various places to explore with changes in civilization.

This is just a Demo Version made within 2 weeks and has won Student Game Of The Year Award at Indian GDC 2019.

Hope you enjoy it!

I relly love the game. It isn't to easy and the game looks pretty good. there stil are a few bugs that really need to be fixed though. in the picture beneath you can see an enemie that is gliched in me, he couldn't het me and i couldn't hit him. 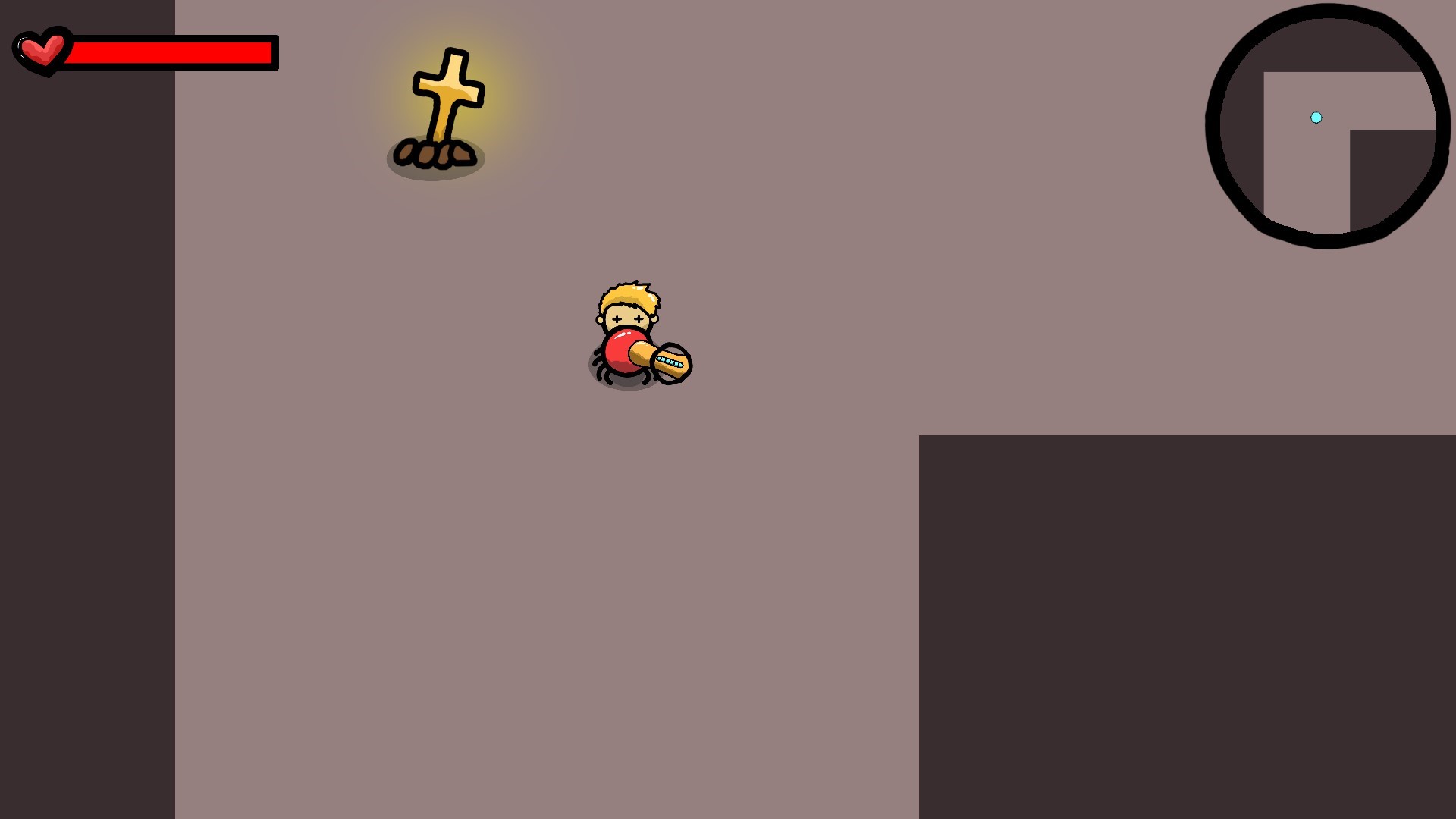 Firstly, I'm glad that you played the game and provided feedback.
Yes, I'm already working on next update with bug fixing and it may contain lots of new things like a store, an inventory and many more things.

Hope you enjoyed the game, and will play future updates too.

I loved it. The colors and the game play were excellent. It was challenging enough that I had plenty trouble figuring out what to do but it was still enjoyable. Though I did fail a lot. :P

I really liked your game, though I have some suggestions

1. I think it would make the game more interesting if game has multiple characters like Knight, Elf, Mage, etc for Player to choose and play from as I would be more like an RPG.
2. The Spider Boss can get really annoying so I think it would be more fair if you can stun or something.
3. The power ups would be a lot more useful in this game if you got more and more later on

Thanks for suggestions! I'll surely look into it.

Okay, this game was absolutely amazing and I found the world of it very charming! The story line introduced shows a lot of promise from the well-incorporated cut-scenes and I was surprised by how well the colors worked ! When some games have the retro, neon look, most of the time, it can cause a bit of an eyesore, but that's not the case in this game so, nice job!

Thanks! Glad you liked it.

I've got a lot of good thing to say about "Another World" and it's overall amazing! The story is well written, game is gorgeous, combat is fun and the music is fantastic. Also there's quite a bit to do in the demo, you're doing an incredible job and I look forward to support the game and it's future.

Means a lot to me. Thanks!

Beautiful game. The music is awesome as well as the character design. The story also quickly pulls the player in. Looking forward to play the full game. I do think you can improve on such:

-Multiple weapons with tiers or shops to buy ammo or weapon.

-There is no incentive to killing enemies.Rolling through everything to get to the goal seems to be the optimal strategy.

-The player cannot walk behind trees. This might be a design choice to avoid occlusion, but I think it subtracts from the illusion of height difference.

I am pretty sure of the things are already on your list. To be honest, I had a really positive experience playing through the demo.

I'm glad that you really enjoyed the game.

I made this game within a month for IGDC 2019. I had the things you pointed in mind and I will look into it, thanks for your suggestions.

This game was just a nice surprise. It's hard to find so many good things in an indie game, sometimes  you get good action but without personality or good writing. But I found it in every aspect that makes a good game for me, well crafted characters,beautiful animations, good soundtrack, etc.

I'm looking forward for the complete game and I will definitely buy it.

Thanks, that means a lot to me.

Next update won't disappoint you either. Working on lots of new things to add.

The game is full of promises. With real "adventure" vibes, it's so pleasant to play! Characters and story seem interesting and you can feel the love put into this game. Great work!

Fantastic game, really looking forward to the full version,the game reminds me of stardew valley, and the story is really good.

Star-dew Valley is an amazing game. I'm honored that you compared my game to it.

Great art and music! Also liked the boss battles very much, I think this is were th combat really shines- Cool attacks and nice animations.

Thanks! I'm working on improving Boss Battles, adding shops to buys potions and weapons and many more things.

First adventure's survival timing seems to be quite long for an unchallenging level.

Both boss seems to stick onto me when i got close to it from above. Can't escape from it.

Maybe make spider boss pounce and get stunned or hit once and move away.

Ghost boss can be avoiding player as it's a range boss.

Levels are too empty and big/long. Might want to reduce the size.

Tunnel vision doesn't seem to clip away most stuffs such as AI, health, projectile. Minimap defeat the purpose of the tunnel vision.

I played until the ghost boss and didn't defeat it.

I really appreciate the fact that you pointed to these things.

-I know trees colliders could be adjusted with z-axis but I wanted to keep is simple to match the art style. Also, In Houses too it could be done. I'll probably re-do it again in upcoming update.

-I know First adventure is a little boring but few people were getting trouble with Top Down shooting mechanics, that's why I made it like this- so that user can get adjust to it.

-Making Boss stunned is actually a great idea. Maybe like when it's on low health it gets stunned and player can make a finisher move. Will look into it.

- Both Bosses have similar Movement Mechanism, I made it so that player has to move from edge towards center as bullet lifespan is limited and Boss shoots towards player. You gotta use Dash ("Right Mouse Button" for PC), It's helpful.

-I actually wanted to place more NPC's and objects in adventures to make it less boring, will surely look into it.

*After Third Boss ("Ghost Monster"), Nearby Town unlocks- which has improving civilization shown, New Quest with new Weapon to Complete and Lord to meet. Also, game has an Endless Survival mode
at the right side of map from Guild Hall.

Thanks for playing the game!

Hope you enjoyed it.

Idk why ,it looks simple alone but the way you putted it together the graphics are just amazing , if u know what I mean. Btw can't wait for the update, when will it be?

I'm working on lots of cool stuff to add in the game. Next Update will probably be around New Year 2019-20.

Really loved the gameplay, and the artwork is so simple yet looks amazing. Did you really made this in a month?

Yes, I made it in a month. It's just a Demo, I'm working on Updates. Stay Tuned!

nice game, and has a meaningful story. 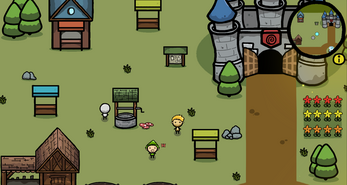 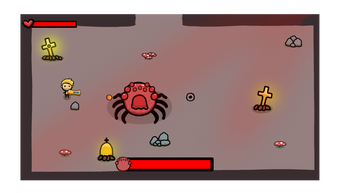 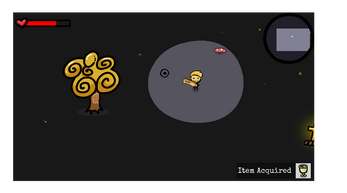 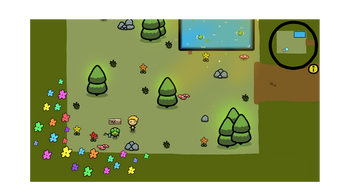 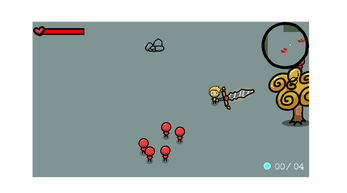 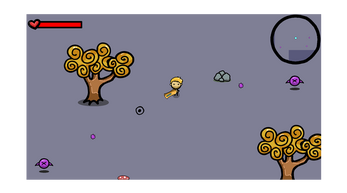